How to Publish app on Google Play Store – Guide & Checklist

The android operating system is backed by the Google Play Store which has 3.4 million applications as of January 2021 downloaded over 1.8 billion times. All this data showcases how Google App Store has grown significantly over the past decade. A lot of applications get published almost every day but a lot more get rejected due to various technical and legal reasons.

Therefore, publishing an Android App on Google Play Store is not only an exciting prospect but also a part of the application development process. This process impacts directly on the performance of your application and the growth of your business relatively. So, understanding the process of publishing apps on the Google play store becomes highly important.

In this blog, we have broken down the process of android app publishing on Google Play Store as well as checklists followed before the launch. This blog also covers aspects such as creating an APK, understanding the legal requirements of publishing the app, and creating other assets as well.

Before publishing an app on Google Play Store and distributing it to the users, the application must be technically tight and legally strong. The publishers must make sure that the application has everything so that it does not get rejected. Here are the checklists:

Newer applications must meet the target API level requirements. Also, have App bundles to be able to get published on the Google Play Store.

The Google Play Store has made it mandatory for all new apps to use the App Bundle (AAB) from August 2021 onwards. This will make uploading the application to the Play Store easy. The backend of App bundles will help generate an installable app variant dedicated to the user’s device. This will result in a smaller app size and faster installation of all applications irrespective of the installing device. 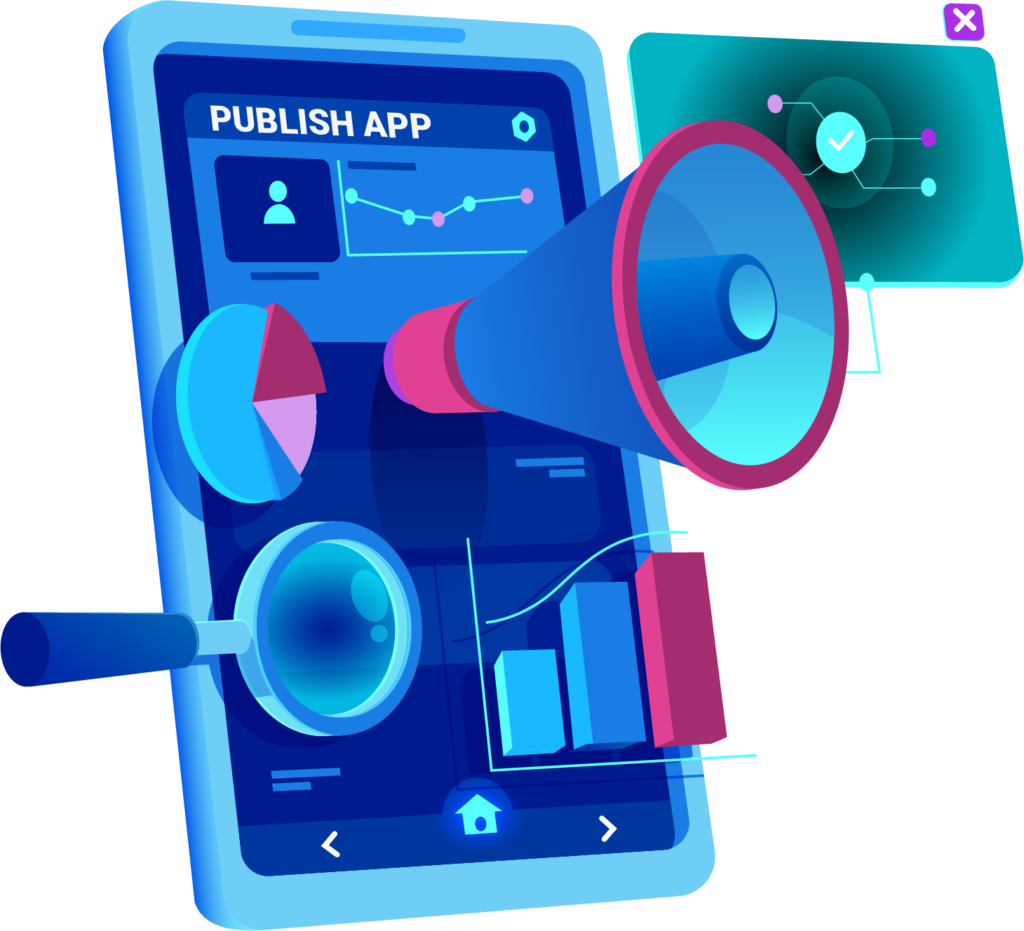 The application must have strong legal foundations to comply with Google Play Store’s terms of services and the laws of the United States in order to be distributed throughout the world.

To be legally strong, the application must have a Developer Policy Center where information like restricted content, intellectual property, and forbidden malware or spam are placed. This is the center where the users can go for all the information about the product and its services and tutorials. It is here that the formal distribution agreement is also available.

The new applications are also legally binding to meet the US export laws as the Google Play Store servers are located in the USA. The application, thus, needs to be exported to be delivered worldwide. It is mandatory even if the application is not being made for US customers. More export compliance can be read in the Play Store docs or the official website of the US Bureau of Industry and security.

If the application has a local target value, it must also meet the local compliance in the customers’ countries. The most important of such laws are the GDPR laws as formulated by the EU/EEA countries. These laws are mandatory as failure to comply can attract huge penalties.

Details of the Application

When you go for store listing, you would require to furnish the following details such as:

All these details mentioned above are mandatory to fill in. localized to any combination of a language and region which checked in the customized listing on the Google website.

As an app publisher, you must decide if your app is free or paid at the beginning. Changing an app’s pricing from paid to free anytime but not the other way around. As the app doesn’t have a price tag once rolled free initially. But a free app can still have in-app purchases option. The app publishers should also note that receiving payments from users is not available in some countries such as Iran or Cuba as economic sanctions applied by the USA. Find the updated list of countries where you can’t receive payments in the Play Store docs.

There are some in app graphics requirements such as app icon and screenshots that must be provided before the launch of the application for listing purpose. The publishers can also add a link to a video on YouTube to promote the app features and its benefits to the users. By default, the application may also be promoted outside of Google. But you can opt-out of such external marketing tactics by changing the setting in the Play Store console.

The app icon usually will look like the launcher icon but here, a higher resolution is required. The resolution required for the app icon is 512 x 512 px. You can use the Android Assets Studio to generate the app icons with all the required standards.

The feature graphics is the key point of promotion for the app and hence a feature graphics of 1024 x 500 are used. This graphic feature is used in various places on the play store and website.

The app publishers must provide at least 2 screenshots of the application during the publication process. However, you can attach a total of 8 screenshots as per the device sizes such as phone, a 7-inch tablet, 10-inch tablet, TV, and any other wearable device.

The Google Play Store has not made putting the promotional video mandatory but it is recommended especially for games to showcase the graphics and actionable of the game. If you have the video of the promotion available, using before the screenshots on the app page. It is advised to avoid any copyrighted material to prevent the violation.

If the application is meant for android TV-enabled Apps, the developer must also provide a TV banner so that is used to display the app features on the TV. for a Daydream enabled app, a 360-degree stereoscopic image is a must.

The Publisher must decide the category or store in which the app will belong. This will help the users find the app easily while searching. You can use up to 5 optional pages like shopping or finance or comics or loan to make your app more visible on the app store.

The application must have a dedicated contact center for users to be able to contact the developer regarding any issue. Conversely, it will be used by the developers to provide support. An email is required here and it may be different from the owner’s Google account. You can also add a phone number and a website link as well in the contact center.

The content of the app is its backbone. While it can do a lot of benefits for the users, the same can be used as an inflammatory object to certain sections of the user base. Therefore, Google needs to check the content provided in the app to correct it before publication. Here are the content requirements:

Every app must have a privacy policy attached to it for it to treat the sensitive data it counters. It is highly required if the target audience includes children below the age of 13 years. These privacy policies are prepared by a team of lawyers by taking a cue from the privacy guidelines provided by Google.

The publishers must also declare whether their app contains advertisements at any point because the customers must know beforehand if they are going to use an application that has advertisements in it.

The publishers must also ascertain if their app is restricted anywhere or for anyone whether by geographical location or require any sign-in by the users before they use the application. In that regard, the application must provide complete instruction for review.

Check the IARC rating assigned to the app or game that you want to publish. Authorities such as PEGI, ESRB, or USK based on the questionnaire filled by the publisher assign the ratings.

The publishers also need to indicate the target age group(s) to publish apps on Google Play Store. If the age of the target group is lower, the restrictions are heavier and the publisher needs to answer more questions. If the app is for all age groups, some families’ Policies come into play.

This section is important only for those applications which provide news in any form. There have been additional rules made to enable compliance. So that these apps remain accurate and not provide any inflammatory content for the users as their content changes on a daily basis.

For any app for global users, it must comply with country-wide policies as well as provide device restrictions updates for its users. Here are some targeting related settings that the publisher must check before publishing an Android app on Google Play Store:

The publisher would have to decide whether to limit the availability of the app depending on the geolocations. Such restrictions might arise due to licensing, copyright, or other legal restrictions imposed by the country. However, Adjusting the restrictions by selecting particular mobile operations and configuring them separately for each track such as production, open (beta), closed (alpha), or internal testing.

At some times, some devices tend to not support the app even when they theoretically meet all the requirements such as minimum android version or presence of hardware features such as NFC. Those devices can be excluded from using the device catalog so that users don’t get troubled. However, with current technology, this problem is very rare.

If the publisher wants to sell some service or has enabled in-app purchases, they would have to set up a payment profile to receive such payments. In that case, mention a physical postal address in the app registry.

Setting up a developer page is optional. However, it is recommended as it is common for all the applications published from a developer account. For publishing an app on the Google Play Store, the following details are required: developer’s name, promotional text, developer icon, and header image.

There are significant technical entries that the developer must do in order to publish the android app on the Google Play Store. They are:

The Play Store requires each app to be published to have a unique identification number that may be visible to the users. Once the app gets published, the play store generates a unique ID that you can’t change.

To make any app installable from the Google Play Store, sign in using the directives provided in the app signing by Google Play document. For this, the publisher might allow the play store to generate the signing key for the developer or can use the same key as another app using the developer account.

By following the directions and guidelines provided above, the publisher can easily publish the app on the play store. But before releasing the app to the public, Test it completely to understand any short fallings it might have. The publisher should decide to set up close, open or internal testing to track for any shortcomings in the app and mend it before the big release.

After having tested, the app is ready to be published. During the upload process, Google checks all the app versions uploaded by you. It simulates the basic actions such as taps or gestures and prepares a pre-launch report which is highly helpful in diagnosing the potential issues in the app. It checks all the accessibility, performance, security, and compatibility settings before making the application ready for publishing.

If you are thinking of creating an app then make sure you are aware of all the guidelines to publish your app successfully. Because unless and until your app is not published for your target audience to use; the potential of your app is not bothered. But the first step in publishing your app is creating one. with ON AIR App builder you can create your app in 3 simple steps. Start Now!