How to make an app: 7 steps to create mobile apps

How to make an app? What are the requirements to create an app? these are mostly searched queries on Google. Advancements in technology have shown an effect on multiple industries with the evolving customer demands. Smartphones, in particular, are widely popular among consumers. As per current demographic statistics that the number of smartphone users can cross 7 billion in 2021.

Thus, brands can grow their business reach and customer count highly through the development of branded apps. Statistically, there were over 2.9 million Android apps and 4.4 million iOS apps in 2020. This count is always rising due to high demand from consumers.

As a brand owner, there are particular steps you have to follow regarding How to make an app. This article is a breakdown of the process in seven steps.

Before beginning development, brand owners need to organize their planning process. Primarily, this would set the foundation of the mobile app development process. To understand app creation, the following points are important.

The first step that app developers should focus on is researching the market trends and related metrics. With this data, you can create an effective development plan for your app idea that would work in the current market. Gather data on the competitors in the industry, the strategies they utilize, their weakness, and their strong points. Also, find out about what mistakes the competing brands have made with their app versions and the consumer response to those.

The key to success for brands regarding app development is to choose the correct target audience. Consider which consumer group you wish to target and research their demands. Statistically, 25% of the app users leave an app after just one use. This mainly occurs when users do not find the app valuable. Overall, use these data to develop an app that would attract their attention and ensure high lead generation.

Two operating systems are available in the mobile app market, i.e., Apple AppStore and Google PlayStore. Consider if you wish to target both platforms or just one with your business app. Both platforms have different audience groups and specific characteristics. To note, many experts in the development field suggest the creation of hybrid apps for brands. With this, businesses can reach a wider audience. 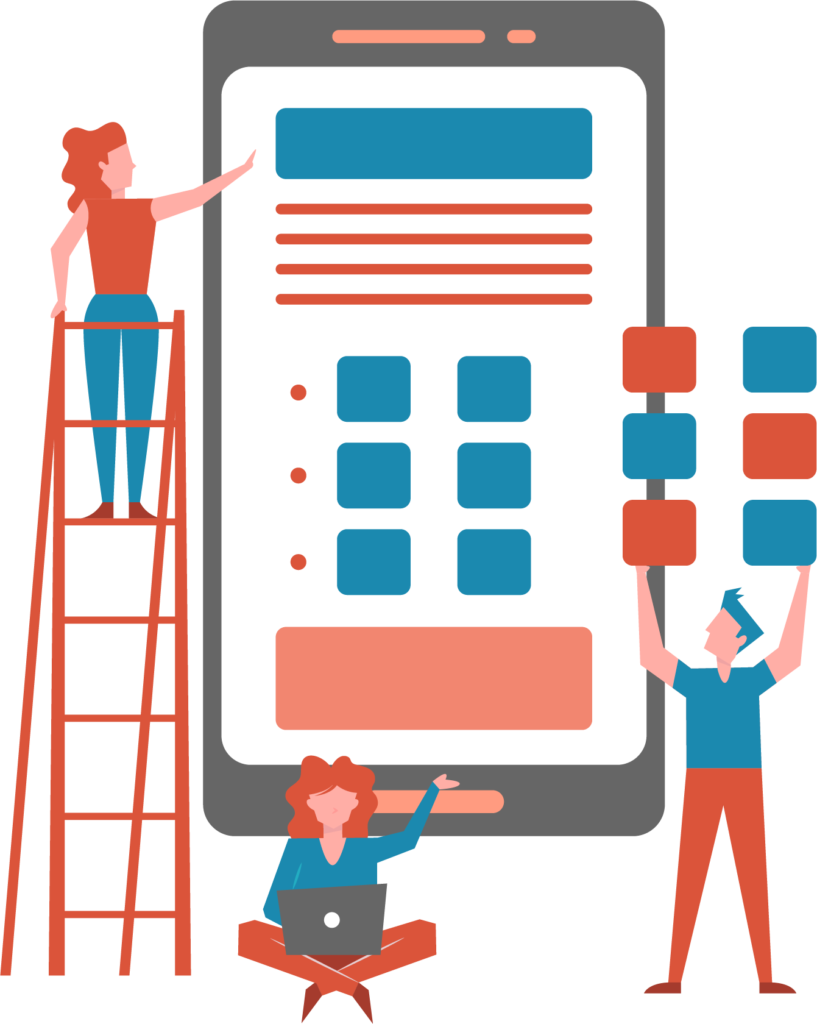 Consider the approximate budget for the app development before beginning the development process. Search about the estimated expenses for app creation and what stages generate higher costs. Based on this data, allocate specific portions of your budget to different app development aspects. Also, set a minimum budget for the necessary resources to avoid overspending. Furthermore, brand owners must consider the revenue models for their apps, like sponsored ads, paid subscriptions, and coupons. A reliable monetization strategy that is compatible with your business model can contribute to your overall profit growth.

The gaps in the market

Check the market condition to see if there are any gaps available in the market. These constitute the problem areas, app types, and questions that are a minority in the market. To simplify, examine a demand that has a niche audience but competitors are not producing the said product. Therefore, if you invest in creating an app for that audience, you would dominate that portion of the market.

In the context of creating an app, the UI and UX design are very important. The UX or user experience focuses on how the users can utilize the app while UI or user interface deals with the overall visual design. Planning these two points effectively is necessary to ensure brand app growth and high customer engagement.

Concerns like the interface appearance and page load time fall under the structural design planning. Statistically, 65% of app users form a negative image of the business if their app performance is subpar. So, focus on the following points to make your app responsive and user-friendly.

Map of the user's journey

Here, developers should visualize a map of the app usage flow of the users. It should detail the suspected track of the users’ experience while using the app.

This includes design aspects of the app, like motion design, style guide, and UI design. Here, create a physical representation or mockup of the final product. Also, multiple brands create a video mockup of the app with screen transitions and animations. Brand owners show such mockups to the investors or shareholders during the development-centric meeting to greenlight the project.

These are simplified digital concepts of the app in development. Here, developers include the expected structure, relationship of the app elements, and hierarchy for the app creation. This forms the app structure backbone. Using the wireframe, developers can create an MVP or an interactive model of the app. An MVP is a dynamic pre-development prototype of what the eventual app would look like.

In terms of creating a usable app, add elements that would require the least operational effort. Users prefer a simple, responsive interface that they can use with the least clicks (generally, follow the three-click rule).

Brand owners need to research the types of technology available for app development. They can use the data to select an effective technology model for their app.

Native app- These apps for both Android and iOS platforms have high demand among smartphone users. Developers can choose among multiple features and native APIs for such app development. Here, coding independent outputs are necessary for different operating systems.

Hybrid app- These apps work on multiple platforms and devices. Also, these can adapt to both operating systems and include a higher number of features. They are less costly than native app development for most brands.

In the following level, consider the right app development process for your branded app. Here, three common alternatives are available for brands.

Hire a development agency– You can hire freelance developers or an agency for the development process. Consider your overall budget to choose a reliable team for the service. Generally, this is more suitable for larger brands that have more resources and budgets.

After selecting and planning the process, you can begin with the development process. Regarding how to create an app, focus on the following factors.

For the app icon, the logo of the company is usable. Or, you can custom design an attractive logo using available tools. For the app splash screen, select graphics that look pleasant and have a low loading time. This appears while the app is loading when the user opens the app. An app that takes a long time to load can put off multiple users. Also, choose a suitable image or color-block screen for the background.

Here, organize a layout with the priority features in the frontal view. For example, add the search box in a bigger size while keeping a drop-down menu for the features. The mobile screen is smaller in size; so, space management is important during layout customization.

Consider the add-on features you wish to add to the app. For example, sales-based business apps require add-ons like checkout pages, coupon/referral codes, and loyalty cards. Such add-ons are beneficial for increasing brand engagement among users and developing brand loyalty. Similarly, in case the company’s staff would use the app on the business side, you can add a Community Chat add-on. Additionally, enabling the push notification feature allows brand owners to send alerts on products and events automatically.

For the visual elements, it is important to consider the font look and color. The text on the screen should be legible for the users to read. Also, the font style must match the theme of the app. For example, a very bold fluorescent font would clash if the theme of your app requires elegance and cool colors. Here, focus on the page sections, like the page view, header, and content. Clear visible colors and fonts can improve the readability quotient and improve the user experience.

During app development, you may not find particular features and design elements originally. Thus, you can customize them into the app for enhanced performance and customer satisfaction.

Evaluating the app is an important step in the app development process. Testing allows developers to find the issues that they missed during the development. This step is essential to fine-tune the app for any remaining issues before deployment. Also, it is important to mention that it is better to conduct app testing sequentially throughout the process.

Brands developing their first app are likely to make more mistakes in their initial product development This applies to professionals who are not taking the assistance of development agencies or freelance programmers.

Business owners who skip this step during app development do not notice the present bugs and operational issues. This results in a higher rate of app crashes and lagging loading time. Statistically, 44% of users find defects in the app while they are utilizing the app after release. Such issues can decrease the interest and trust of your customers. To avoid this, conduct testing phases carefully for a long time.

Alpha testing– Independent testers or potential end-users with technical know-how conduct operational testing. They manage this at the site of the development before production.

Beta testing- Here, the brands release beta app versions to a small group of the target audience. These users check its performance quality and functionality.

Later, app owners use this data to make any necessary changes in the app before the launch. Also, many developers conduct app testing after app deployment to produce further updates and bug fixes in the next version.

After the development process completes, you can publish your app on a suitable platform. Here, consider metrics like legacy issues, marketing materials, and descriptions for effective deployment to big audiences.

Before the launch of the app, fill out the necessary details on the product page about the app. These include data like the app’s name, description, icon, and keywords. Also, focus on the Privacy Policy and Terms and Conditions regulations. Add pictures or screenshots of the features or app pages in the product image portion. Make sure to add screenshots of how the app would look on different iOS devices. For example, if you are providing the Dark Mode feature in your app, upload one screenshot of it. Furthermore, fill out the necessary legal details similar to the Google platform and then put the app up for review. The staff of Apple would conduct tests on this app for a maximum of 2 days to see if it meets the App Store rules.

During the launch, focus on factors like configuration options and promotional material (videos and graphics). Also, consider the legal assets related to the upload like age and/or geographical restrictions and privacy policy. Select the configuration strategies for continuous up-gradation after deployment. For most brand owners, this is an optional task.

To summarize, brands should focus on the app development process carefully to ensure all stages work efficiently. After the development process completes, app owners must check the reviews of the app from end-users. With this data, they can create further version updates and promote the app to the correct demographic.

Some of the stages of app development overlap with each other, like the testing phase. Also, for different app types, particular developmental steps and sequences are different. However, this overall guide should give you a good foundation to rely on to develop mobile apps.

You don’t have an app yet and want to create your own app? With the ON AIR Appbuilder it’s a breeze. And you don’t have to be a programmer to do it. Whether it’s a restaurant, hotel, or other business app, you’ll find a wealth of options that will revolutionize the way you build an app. start now!