Automated VS Manual Mobile App Testing – When to Use What

Mobile app testing is very crucial in creating a successful and flawless app. As we know there are two approaches to testing – manual VS automation testing. Both have their pros and cons, so choosing one to fit your project is not an easy task. But to honest using both the testing methods can work well.

It’s not about whether you should be using manual or automated testing or which one is the best a which one is outdated. It’s more about understanding what the differences are and which one should you use in which situation.

For instance, manual testing is required when at the early stage of app development to check the usability of the app and to explore other basic features of the app. Manual testing requires human insights.

Let’s look into these testing methods individually to help you determine what kind of testing you need at different stages in the app development cycle.

Automated mobile app testing gets one point when it comes to speed. It is helpful for regression testing and executing time-consuming test cases. As a mobile app evolves, the product flow changes, as well as the user interface requirements and specific features. As a result, every change calls for an update in the automated test script.

Another important thing to take into consideration is that its ability to reuse tests. This results in low cost and quick turnaround time.

In order to get started with automated testing, QA specialist chooses a suite of tools, write scripts and executes them, and collects the data. Unlike manual mobile app testing. It doesn’t require human supervision. Instead, humans or developers will be limited by the testing tool.

Automated app testing is used in order to test features that require a high load of tests to be executed simultaneously as well as those that require a large amount of data.

While automated mobile app testing often seems like an easy solution due to being fast, efficient, and unsupervised. But it has its drawbacks as well. Let’s examine the pros and cons of using automated testing to test mobile apps.

When to use Automation mobile app testing?

When performing regression testing or cross-platform testing automation method can be used.  In case the regression test fails, automated testing gives you a quick look at what went wrong and what needs to be done. Also, in the case of regression testing, the human eye can miss the tiniest details presented in such vast data.

Even if automation testing is dominating the world, you can’t simply ignore manual testing. Human instinct and precision are needed for a successful app. Automated testing can only detect errors it was programmed to detect. App crashes that don’t show any obvious causes will always need to be tested manually to find out the culprit.

When it comes to cost automation mobile app testing is a better option for large-scale products. But an MVP at its early stages needs to be tested manually. If you are hoping to take your MVP to market quickly, manual testing is the way to go.

A usability test is another area where you require manual testing rather than automated testing.  How will certain feature work with the users, how many ways can it go wrong and what kind of problems the users could potentially run into, is something that must be manually tested. Checking how your app behaves with different internet connections? How fast is its loading time? All these questions can be answered using manual testing. 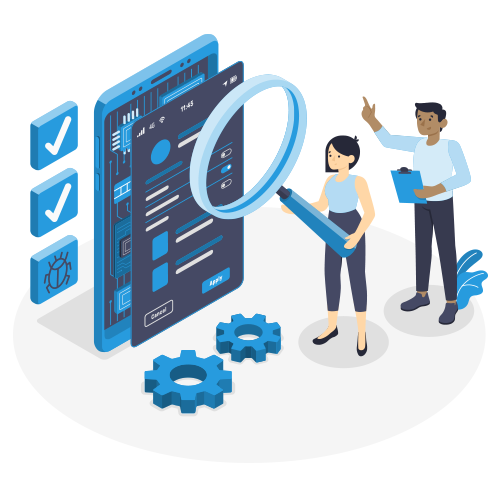 When to use manual mobile app testing?

If it needs investigation of an unknown anomaly, it needs a human.

manual testing is required to determine which features work and which ones don’t. On-the-spot observation analysis, thinking, intuition, and experience are indispensable prerequisites and thus, manual testing is once again, the winner.

To test a mobile app and make sure it’s reliable and ready to go live, it’s crucial to have a team of competent testers. When you’re starting, you probably want to start with manually testing your MVP. As you go further, you may want to test across multiple devices and platforms with changing code and comprehensive test scripts. At this juncture, you could use automated testing to make your job simpler. The two aren’t rivals. They are comrades working together to help you create a better app.

Automated VS Manual Mobile App Testing – When to Use What

It is very important to test your app using automated or manual testing in order to ensure a bug-free app. With ON AIR App Builder, you can create an app and test it before publishing with ON AIR Previewer. Start Now!