App development has become a thing today. With more than two million apps on the App Store and Google Play Store, finding new ways to differentiate from the competition and offer consumers a unique experience is vital.

As an outsider, it’s easy to feel as though augmented reality and virtual reality are banded around aimlessly. Earmarked as the Next Big Things despite relatively little progress. Whilst virtual reality is continuing development at a pace, with firms such as Apple working on their gaming headset device. Augmented reality offers a very real and immediate opportunity for app developers.

Augmented reality is a powerful tool that brings your product & services to life. Once consumers have seen how it could look in the flesh using their smartphone camera and some basic AR technology, they’re more likely to buy from you. In our COVID-19 era, where retail’s taken a major hit, augmented reality is all the more important.

App development is highly influenced by Artificial Intelligence. Allowing brands to create smarter, more engaging software that takes away common pain points. Whether you’re building a corporate B2B app or a consumer-focused app, you’ll find several AI tools and functionalities that can be easily integrated into your software.

It also allows your users to complete monotonous tasks and increases accuracy and precision in product recommendations. Whether it’s chatbots, where you can deliver support to users without having to hire a dedicated customer service department. From speech recognition technology to tap into the growing trend of voice controls, AI is everywhere.

For example, building an app with machine learning can improve your forecasts. Save staffers time. Also, lead to a more productive and engaged workforce. In the healthcare sector, biometrics can identify, analyze, and measure human behavior. Whilst in the consumer landscape; artificial intelligence can help recognize emotion as well as text and images. Increasing average order values and customer retention on eCommerce apps. 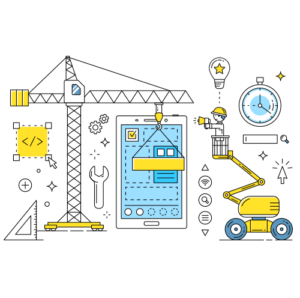 Finally, a quick word on the rollout of 5G technology in the UK. Better connectivity means that there are fewer areas with poor signal. Allowing you to reach new geographical areas. Also, introduce your brand to new customers. UK 5G adoption is expected to reach over 26% by 2024. And as major smartphone manufacturers like Apple introduce 5G modems to their devices, consumers are ready and willing to switch over to supercharged cellular plans.

Greater speed means that app developers can move more data to consumers’ devices. Which could unlock significant new opportunities for your applications. Implementations that traditionally had to be held in the cloud can now be done on-device, opening up new possibilities. Whilst lower latency means increased responsiveness, allowing you to offer real-time augmented reality experiences in sectors such as education, sport, and health.

The ability to connect more devices at once also opens up new opportunities in IoT. With consumers increasingly introducing more smart speakers and devices into their homes.  There are cool insights into the future of the Internet of Things, and implementing some of their findings into your product research and app development projects could help your brand stay at the cutting edge in the years to come.

Building an app with ON AIR App builder is easy but if you want to stay ahead of the competition it is important to understand the growth areas of app development. Building app adhering to those trends is another task. Start Now!