Dos and Dont’s When Building a No-Code App

Less than .01% of apps will become a financial success this year. Yep, just last year, out of the millions and millions of apps in the world, that tiny percentage will be the sole survivors, at least from a profit standpoint. There are countless reasons why. Some founders might not validate their ideas. Others might get passed up by the competition.

Most app founders do one thing wrong. Most simply dive right into building their app and forget to think about anything else. They come up with their billion-dollar idea, just know it’ll be a success, and pour all their efforts into creating it, without ever stopping to think about the consequences.

Consequences like spending thousands of dollars and hours building something that just doesn’t work. And not necessarily literally — it might function just fine — but in an all-encompassing, “I can’t even figure out where I went wrong,” sort of way.

Just remember you can’t run with an app idea, ignore all the tedious and “businessy” aspects, and call it a day. You need to plan and prepare.

Learn the “dos and don’ts” of building an app, plus major surprises you can easily avoid along the way.

Do: Know your market like the back of your hand

Validating your idea by knowing the target market is important. Diving deep into market research has the true potential to make or break your app. Beyond validating your idea, though, you need to know your market in order to build a solid app. Because in the end, we are building this app for our market audience.

All the features and functions, down to the size of font you use, need to be targeted toward the right people. And if you don’t know your market, it’ll be impossible to get it right.

Do: Set goals for your MVP

Once you know your target audience, start with goal setting. Here it’s not about setting another business plan. But more likely to set the milestones that can give you the minimum viable product (MVP) for testing purposes.

You need to decide your idea of MVP. That’ll help validate it even further and warrant real progression. Many of today’s hugely successful companies started out with nothing more than an explainer video. So decide on your MVP, and then give yourself solid milestones and a set-in-stone launch date to reach.

Do: Choose the right platform to build on

Do: Iterate again and again

Collecting data and learning from testing efforts gives you the ability to iterate smartly. Does a certain feature or functionality not work?  Iterate again and again. Making changes in your app depending on feedback might seem like a lot of work but it helps you increase the quality of your product.

Do: Know your KPI

Now imagine you have launched MVP and gathered a solid user base in few months. You also started PPC ads on social media and Google to generate traffic on your platform. Key performance indicators (KPIs) will become your lifeline after launching your app. But KPIs that matter is different for everyone. So you can’t just analyze whatever data that one person wrote about in their KPI article and call it a day.

Don’t: Skimp on your research

Most people think they know their target audience because of the quote “You are your market”.

If there’s one game-changing thing you can do for your app, though, it’s pretending like you have no idea what your users want, and spending time figuring it out. Not doing enough market research, or failing to do any at all, is the quickest way to seal a not-so-bright fate for your app. 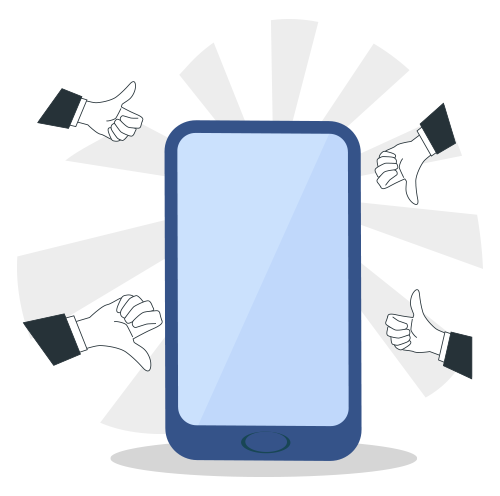 When you launch your app to the world, you’re going to want it to be perfect in every single way possible. You’ll want every feature and functionality you’ve imagined to be developed, working, and ready to go. But please don’t waste your time. It’s not that your ideas are bad, but focusing on every little detail before launch will likely mean you’ll never actually get to launch. Avoid putting too much on your plate, especially if you haven’t even tested your basic MVP yet.

Don’t: be your own beta tester

It’s not enough to test your app all by yourself. Because honestly, you are going to be biased when it comes to your app. By using real beta testers, though, you can pinpoint areas of your app that need improvement and iterate. You can watch them interact with your app’s pages, observe any obstacles they hit, and see where their interest wanes or peaks.

Dos and Dont's When Building a No-Code App

With ON AIR App builder you can finally build your app without needing a technical background.  With drag-and-drop functionality, you can speed right through the development of your MVP. Start Now!